Last year around this time I saw a video featuring skull pizzas and became obsessed with finding the skull pan, only to discover it was sold out everywhere and people were selling them for obscene amounts on eBay. 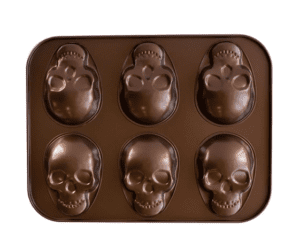 This year, I found the elusive skull pan at Target online for only $9.99 and still available! Score! In case that sells out, here’s the pan on Amazon but it’s triple the price. Boo.

Buy the pan and then make the simplest and yummiest Halloween-themed dinner ever! You and your family will love making the “brains” ooze out.

The pan features six skulls which meant I could bake four as pizzas and two as desserts. For the pizza (which is really a calzone), I went the easy route and purchased the roll of ready to bake pizza dough, a jar of pizza sauce, mozzarella cheese and pepperoni. I would encourage you to purchase two rolls of pizza dough as I felt like I didn’t quite have enough and generously stuff the cheese and sauce inside to make the “brains” oozier. 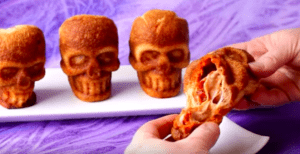 For the dessert calzones, I purchased red melting chocolate which you can find online or at stores like Michaels and put the chocolate inside the pizza dough. I baked it all at 425 for about 14 minutes and buttered the pan before baking so that the skulls would easily come out of the pan.

In that exact same time that it was baking, I sautéed asparagus and broccoli in butter on the stovetop.

In less than 20 minutes, dinner was ready! It might not be the healthiest dinner option but it is one of the cutest! If you scroll through the photos above you’ll see I made a little skull and crossbones with the asparagus and basil for the eyes.

Be sure to eat the dessert ones relatively soon after they come out of the oven since the chocolate will look more like blood and won’t harden. 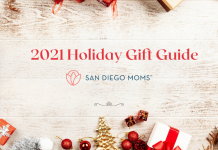 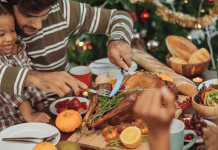 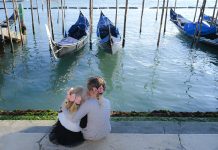 Venice in Winter? It Might Be Just the Magic You Need

Nicolette Liebermann - November 27, 2021 0
GivingTuesday is coming up on November 30, 2021. As we find ourselves hitting stores and websites for Black Friday and Cyber Monday, GivingTuesday helps...